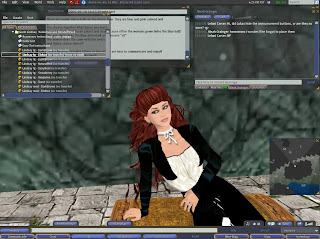 It’s been a shockingly long time since my last update. It’s only because I’ve been busy wandering around and getting my virtual sea legs. Second Life is kind of an all-encompassing experience; if you get into, you really get into it. To the exclusion of a lot of other things, at least at first.

I seem to have a “job” and a “place to live,” and my “life” has started to settle into a pretty comfortable routine. Also, I’ve evened out my First Life/Second Life time priorities, now that I’m no longer really a “n00b” (a player of less than 30 days).

Here I am, acting as hostess at the new “jazz dancefloor” at Lauks Nest. Lauks is considered something of a virtual treasure on Second Life, because it’s a famous “build” and a lot of people have affection for it as one of the first beautiful island sims that was designed just to be pretty, for people to explore and find all the interesting little secret places. Lukas Mensing, the current owner, considers it his cultural duty to preserve this place, rather than let it die off or devolve into an abandoned place, or turn it into a shopping mall or casino full of zombie-like avatars. So he pays hosts and hostesses to interact with people, especially new people, who find their way here.

There’s a whole issue in Second Life that seems to revolve around the tension between culture and commerce.

Culture means encouraging people to communicate with each other, to create things for everyone to enjoy, and to form communities around these things. There are some pretty wild communities in Second Life – places that are permanently on my personal “no go” list. But they are communities knit together by an undeniable bond, and it’s not my place or my right to judge them. I’m interested in places where there’s something beautiful to look at, where there might be music or dancing, where there might even be some kind of theatrical performance or topical discussion. Lauks is occasionally all of these (although tonight it’s kind of slow – which is why I’m catching up on the blog. I belong to a Lauks “group,” among others. I also belong to the Anglicans of Second Life group, a friend’s group that’s like a fun club for wannabe pirate grrrls, and a couple of groups that function like housing associations.

Commerce can be benign – well designed clothes or hair for sale in attractive areas full of shoppers is a pretty good thing. I belong to a few “shopping update” groups – I get notices about new products, and occasionally, I get free stuff! Empty, dead malls full of abandoned shops, peopled only by “campers” who are literally paid to hang around places in order to pump up their traffic, is not that good a thing. Lovely, scenic residential areas that are being encroached on by ugly “ad farms” with spinning signs are not good at all – I’m member of a group that’s got this very problem, literally on their doorstep.

I guess my formation as a citizen of Second Life is thus complete; I’ve come down on the side of culture versus commerce. I’m not adverse to being paid for this stance, though… I get a small stipend for hosting. I usually end up donating a chunk of this to various tip jars online.

As a female, I’ve enjoyed fooling around with wardrobe items and most especially, hair and skin. In my First Life incarnation – the actual flesh-and-blood one, that is – I am NOT interested in clothes, makeup, hairstyle, or fashion. I’m a thoroughgoing tomboy. Jeans are my daily attire. I’ve always been a difficult size to fit, always at the very top of the range: when I was in school, I was just a little too big for Girls, too stocky and tall for Misses, too young for Womens. Now that I’m a Womens, of course, I’m at the far reaches of that range. Since the fashion industry considers women like me unwanted and invisible, for the most part, I’ve given up on it.

But in Second Life, you can be any size you want. You can be “normal,” but what is normal? And isn’t it a little boring, when you can be a tiny, or a dragon, or a Godlike bowl of noodles?

Still, choosing to walk around in a standard human avatar size and shape means that you can wear anything you want… or if you are so inclined, wear very little or little at all (if you happen to be in an area of Second Life that does not discourage nudity).

I choose to be an ordinary but rather pretty woman, quite tall and powerful looking and well muscled rather than thin or “skinny.” I have a lot of clothes, and I wear whatever I want. I change my hairstyle incessantly, although I always stick to the reds and auburns, because that is who I am; a redhead. I can’t be anything else, unless I wear some completely non-human form… and even then, I might be a red-headed elven woman if I feel like it.

The other night, I was browsing the newly redesigned “search” box, and found something to do that sounded interesting. Sometimes you can actually find something to do that’s not “camping for free money” or “hippie pay,” as the high traffic those places generate artificially boosts the rankings for an event.

It was advertised as an evening of live entertainment and a tea ceremony, hosted by a geisha, but the catch was, everyone was to attend in as a “tiny,” with a very small avatar, human or animal or “other.” The geisha herself would be a “tiny” as well. 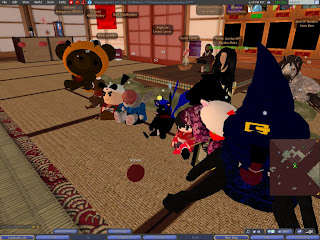 Unfortunately, I didn’t get a picture of okasan, the actual geisha – but we were all very cute as we sat on special small “kritter sit” poseballs and watched her dance and play the samisen (a stringed instrument, like a banjo). I took this photo so that all the titles were visible – I’m the little black catlike thing with blue wings and a smoking tail. To my right were a tiny kitten in a kimono, a tiny little samurai that looked like a Fisher-Price figure, and a honey bear. To my left, another Fisher-Price figure in a kimono, a Hello Kitty, and something that changed from arachnid to lionfish and back a few times. 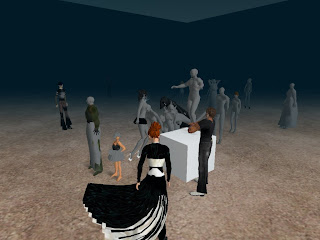 Not that Second Life is a perfect place. Most of the time, you log in, you find your friends, you wander around finding events or places to shop, you hang out at your favorite venues. Sometimes, things go wrong – actually, lately, things go wrong a lot. A few weeks ago, there was some system outage that caused everyone to “rez” (appear) at a random point just above this white cube, which marked the center of an empty area of ocean. People piled up on top of each other, unable to move very far, unable to “teleport” to another place. I couldn’t fly out, as the borders of the area were locked somehow. There was nothing there except one house on one tiny island with a security system that prevented you from going ashore, and there was also an abandoned roadway that ended in midair. There were a lot of Portuguese and Italian speakers trying to figure out what was going on; basically, we’d been abandoned at the bottom of the ocean. Logging out and back in just brought me back to this point, so eventually, I flew in several different directions until I found one that was not “locked,” went as far as I could, and teleported from there.

This time, I was shown the “the system could not teleport you to your destination, you have been routed to another location” warning, but ended up at some sort of real place that was probably on the mainland, more or less stable. This time, there was a highly entertaining mix of avatars from groups that normally never mix… including a slavemaster of Gor and his subservient slave girl, who spent the whole time silently kneeling in front of him with her knees spread, pretty much nude. Everyone else was chatting and ignoring them, but the IMs going back and forth about them got pretty funny… as in “she’s his PET? Ugh.” Eventually, I was able to teleport somewhere interesting where logging out wasn’t a problem (logging back in returns you to where ever you were, so if you’re in a bad spot, you keep coming back there).

I went to a peace rally planning meeting and took a photo of the amazing array of avatars that were there, but decided not to publish it. Why? Because some of them objected to the photo being taken, as there’s a sound effect when you “take a photo” (as opposed to simply copying a screenshot to Photoshop). Which was a shame, because it was pretty amusing to be sitting next to a giant red dragon who made jokes about how tasty humans were when covered with maple syrup (I was eating Eggos with syrup at the time). Also, the guy leading the tail end of the meeting – about when it devolved into self-aggrandizing posturing – was this bizarre collection of details and accessories, who sees himself as a revolutionary, I guess. He and a few others were a little paranoid about The Man and wanted to protest in front of IBM, but cooler heads were attempting to prevail and argued for sticking to the original schedule.

I got frustrated after realizing that a lot of people had put a lot of work into organizing the event, but a few people insisted on dragging other issues into the protest, renaming it, changing all the slogans that had already been decided on, and changing the focus so much that it threatened to become the Second Life version of the WTO protests in Seattle that devolved into gangs of kids running around throwing rocks through the windows of well-known department stores because they were evil corporations.

It went off pretty much as planned, but I ended up having something else to do that day (ie., I sold out by taking a “job”). But it made the First Life national news – someone asked me about it the next day. In church!

That’s another thing. I attend church in Second Life at the Anglican Cathedral. It’s just something that I enjoy very much, and I’ve met a number of really nice, talented, and interesting people.

I’m also a member of a Shakespeare group – some actors are getting together and putting on Hamlet this year, and I plan to attend when they get around to putting on a “live” production. There’s a lot involved in writing scripts that are not for speaking, but for animating your avatar’s face and body so as to convey meaning. It’s pretty fascinating, what they’re trying to do. They’ve already built the Globe Theater, the performances are coming in 2008.

I’m not so much of a n00b now, and although I’ll probably never become a builder or creator of content, I know enough to be able to appreciate the work of those who do build or create. It’s more than just being able to pretend online – there’s fantastic freedom in being whatever you can possibly imagine. I do recommend it, glitches and underwater abandonment and all. Drop by Lauks Nest for the dancing and conversation, I may be there.

This site uses Akismet to reduce spam. Learn how your comment data is processed.